How the Sheep Smell Right Now 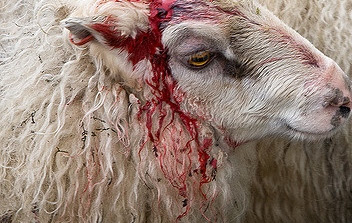 One of Pope Francis' most memorable phrases is that priests ought to take on the smell of the sheep. Most priests live in the midst of their people. They don't spend a lot of time being advised by lawyers, diplomats, or public relations specialists, unless those persons also happen to be our parishioners. I spend almost all of my day in contact with regular people. As a college chaplain, I hang out with young people, eat with them, pray with them, and evangelize with them. Parish priests see the sheep every day. They meet them at daily Mass, at wakes, in the coffee shop, at the dinner table, in the confessional, and in a million other locations.

The sheep are angry right now. They're disgusted, sorrowed, confused, and bewildered. The sheep are looking for answers. More often than not, the place they come to for answers is their shepherds, their priests. Only the worst kind of priest would want to encourage their sheep towards greater anger or deeper alienation. Good priests--most priests--want to explain things. Most priests want to show the flock that things are more complicated than they sometimes appear. Most priests do not want to add fuel to the fire, but want to put things into context. Most Catholics are not looking for blood. They are not looking for widespread resignations and executions of bishops etc. Certainly if things are egregious enough they might want resignations, but most Catholics just want to hear the plain truth. That's what they want their priests to tell them.

Priests are out in the field with the sheep. We have the Gospel, but we don't have answers to the questions people are asking about McCarrick, Vigano, and the Pope. The sheep are asking their shepherds, but we don't know the answers. Right now priests feel as though we are in the field fighting off the wolves and mending the wounded sheep, and then, just when we think the pasture is secure and the sheep safe, another attack comes. Sometimes this attack is from those who purposefully try to stir the sheep up and frighten them with half truths or sensationalized rumors. Other times, however, these attacks come from above. They come in the form of Tweets and statements from high ranking priests, bishops, and cardinals. It does not comfort the sheep who feel the gaze of the wolf upon them when an advisor to the Pope tweets out that "the Pope draws energy from conflict." The sheep do not draw energy from this conflict. The sheep are wounded by this conflict. They do not want to hear that the Pope is energized by it. Similarly, Catholic social media personalities who lay claim to the title of defenders of the purity of the Church and then resort to uncharitable, calumnious, or rash judgments about their opponents, are also inflicting injuries upon the sheep.

I hope that those who seemingly find glee in perpetuating this crisis (those who throw bombs from both sides) know that they are damaging the flock. I know from personal experience that they are hurting the flock. They are wounding the sheep of His pasture. The Pope and the bishops should speak, not because they are being pressured from external forces, but because their sheep are in danger. I'm telling you, the sheep are in real danger. I know this because I--like most regular priests--are among the sheep. We're doing our best, but the attacks keep coming. The snarky tweets, carefully crafted statements, and dismissive silences are leaving the shepherds in the field in a precarious situation.

If shepherds should take on the odor of the sheep, then the priests of today smell like blood because Christ's sheep are wounded.
Posted by Fr. David Barnes at Monday, September 03, 2018