Priests Should Talk More About Money! (But Not the Way You Think) 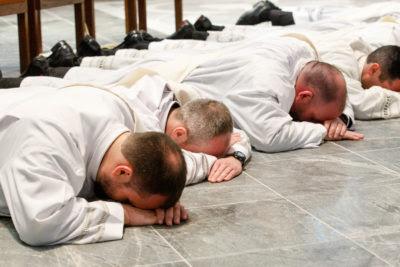 When I was first in the seminary, occasionally someone would ask me, "So, how much does a priest make?" The first time I heard the question, I was dumbfounded. I had never even thought about it. It probably wasn't until I was almost done with seminary that I had any clue what the yearly stipend for a priest was. I think that's true of pretty much every guy I knew in seminary. We were there because we felt God was calling us to be priests. We had the sense that somehow we'd be taken care of, so money wasn't really ever on our minds.

As I've grown older, however, I find myself thinking more often about money. How much should I be saving for retirement? Do I tithe ten percent before taxes or after taxes? Are the retirement programs that are currently in place for priests going to be there when I am seventy-five? How do I live simply, give generously, and be responsible in saving? What do I do with gifts that people might give to me at Christmas or at other times? Should I simply tithe on those or should I give them completely away? How much is reasonable to spend on eating out? Is this expenditure reasonable or is it luxurious?

Recently I read a tweet by a prominent Catholic layman who opined on the scandalous situations of some bishops who have used the monies of the Church to live luxurious lifestyles and to garner influence with higher ranking prelates. This layman wondered aloud whether or not this kind of culture begins not with elevation to the episcopate, but is in its seminal stage among priests. My initial reaction was to object. I replied that most priests whom I know are generous, not living luxuriously, and are often scrupulous about the use of parish funds. He agreed, but, he still wondered if there is a danger among priests of accepting large gifts without much intentional thought about its effects on their spiritual lives.

That online exchange (which was pleasant and respectful) came back to me recently. I was speaking the other day to someone who told me about a parish that regularly gives visiting priests several hundred dollars to say a Sunday Mass. Honestly, it shocked me. Typically, visiting priests who help out at a parish in Boston for a Sunday Mass would receive a $100 stipend. That stipend is the recommended amount from the Archdiocese. A lot of priests that I know set aside that kind of money and use it for works of charity. I don't help out regularly in a lot in parishes, but that kind of occasional "extra" money makes it easier to buy dinner for a seminarian, lunch for a student at the Catholic Center, or respond to the many requests that priests receive for donations. Like the occasional gift that I might receive from a parishioner, it is a nice extra something. But, I wondered to myself: "What if I were regularly making an extra $400 or $600 a week?"

Would I likely be using that money for works of generosity? Some priests probably would. But, I think that would be a danger for me. I could easily see myself thinking, "Well, I'll give half of that away and keep half."  But soon (and I'm only speaking for me because I know myself), I'd be thinking, "Well, I'll use $100 of it for others and keep $500). The priests that I know who help out in parishes do so not because they are trying to make money. They do it to help other priests out. They are hardworking and generous priests. They do it because they want to serve God and provide the Sacraments to the People of God. And, $100 seems like a reasonable stipend for the extra work; even slightly more than that if the distance is significant. $200 or $300, however, for a single Mass, has the whiff of something seriously amiss. It runs the risk of the pastor of that parish beginning to exercise an undue influence because "he" is so generous. On a priest's stipend, an extra several hundred dollars a week would be a huge increase. That could pose a danger not only for the priest receiving it, but also for the priest who gives it. It can create a sense that the money belongs to the pastor. It can create a sense that "he is generous." Were it his money, he would definitely be generous, but, it's not. It's the Church's money. He should give what is just because the laborer is worth his wage, but excessive stipends to priests can slowly become a poisonous culture. The priest can begin to believe that he is, in fact, generous because he gives away large sums of the people's money. It runs the risk of the priest appearing generous rather than actually being generous. It also sets up the possibility that pastors of wealthy parishes (or even non-wealthy parishes whose pastors decide to significantly exceed the recommended stipend) exercise more influence than the pastor who observes the standard.

I haven't blogged in a few months, and this is probably a rather boring topic for a first post! But, it seems the question of money and scandal is definitely in the headlines these days. Honestly, I think most priests and bishops use the money that they receive to do good works with them. I've had many priests support the Catholic Center where I am chaplain both with their own money and with donations from their parishes. Priests and bishops are mostly very generous men. In fact, when I see the generosity of other priests, I often feel convicted by my lack of it.

At the same time, harmful cultures grow when we all say, "Well, that's the way it works and there's nothing we can do about it." One thing that we can do to help one another avoid future catastrophes is to talk about the way we do things now. Twice this week, I've had conversations with priest friends about money and the way we think about it, use it, and save it. Simply talking about it is helpful. It forces me to examine my life and to think about my relationship with money and how it is helping or hindering my spiritual life. That's a conversation we should all (priest or not) be having on a regular basis. If we don't, abuses begin to slip in and lure us away from living as we are called to live. Maybe when we talk about things, we conclude that the way things are working is perfectly fine. If so, wonderful. But, if we never talk about them, it can lull us into a darkness that harms us and eventually harms the whole Church. Priests should talk about money with one another and with others. It just helps to keep us all honest and to avoid future scandals. Money is a part of life. It's part of a priest's life. That also means--whether we talk about it or not--it is part of our spiritual life. It's better to talk about it with one another so that we can be sure that we are using it in a way that keeps us virtuous, builds up the Kingdom, avoids pitfalls, and helps us to grow in holiness.