Looking Around at Holy Communion at Ordination Mass Deepened My Communion 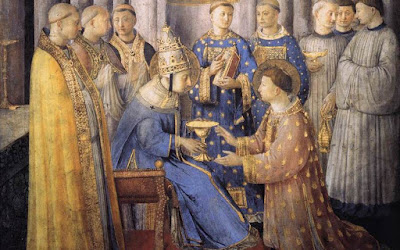 Today I concelebrated the Ordination Mass of five men to the Transitional Diaconate for the Archdiocese of Boston. I had the privilege of vesting one of the newly ordained deacons, a young man from Nigeria who will, along with his classmates, serve the Archdiocese of Boston. It was a beautiful Mass, but I was especially moved during Holy Communion. As the newly ordained deacons were distributing Holy Communion to the Faithful, I looked around the sanctuary as the concelebrating priests received Holy Communion. What I saw was really moving to me.

Firstly, I saw Cardinal Sean O'Malley sitting in the cathedra looking at his presbyterate. For some reason, it was poignant to me. Then, I saw the priests all lined up at the altar. There was the priest who preached at my First Mass. There were a couple of priests whose First Masses I preached at. There were priests that I vested at their ordinations. There were priests whom I've known since I was a kid, priests who taught me in seminary, priests whom I've loved and priests with whom I have had difficulties. There were priests with whom I work, priests who have served for many years, and priests that have only been ordained for a few days. It was especially touching, for me, to see the men who were only recently ordained in the past couple of weeks there among their brother priests. And then, there were all of the seminarians who are drawing ever closer to ordination, serving the Mass.

It was a special grace for me in that moment to see and to love all of these brothers. There we all were, gathered around the Altar, just as Jesus intended us to be.