What Do Women at Wells and Barren Fig Trees Have in Common? 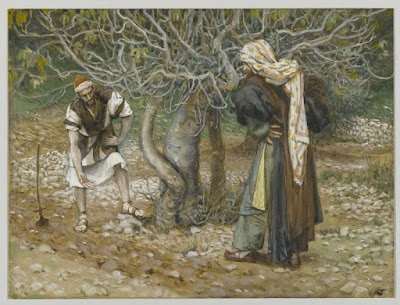 For reasons that are not necessary to explain here, on the Third Sunday of Lent, there are two options for the readings. I have two Masses today, one with the "Year A" readings and the other with the "Year C" readings. Not really wanting to preach two entirely different homilies (because I'm lazy and not that bright), I wondered if I could find a similarity between the Gospels.

The beautiful gospel concerning the woman at the well is bursting with profound spiritual insights for us. This year, as I pondered this gospel, one thing particularly struck me. St. John tells us that many of the Samaritans came to believe in Jesus "because of the word of the woman who testified, 'He told me everything I have done.'" In today's world, the internet is filled with people revealing and reveling in the faults of others. Whatever you say or do today might be posted on a video tomorrow. There is a perverse and twisted world of entertainment built up around the public shaming of others. Leave a bad tip at a restaurant? Be prepared to have your name and face plastered all over Facebook and Twitter. Do something or say something stupid when you're young and immature? Be prepared to have it online forever.

Imagine if today somebody came up to you and said, "I know everything you've done," and then began recounting those things to you. "I know what you have said about your friends. I know what all of your text messages say. I know what you've watched online. I know how much you gave to charity last year. I know what lies you've told, what things you've cheated on, and what gossip you've participated in. More than likely, this would terrify you. "What are they going to do with this information? Are they going to share all of my faults with others, embarrass me, blackmail me?" Chances are, if somebody told us that they were aware of every one of our faults and failures, it would, at the very least, make us uncomfortable.

But what happens with the woman at the well? She goes and tells everyone and they come to believe in Jesus. Why? It has to be because of the way in which Jesus treats her and her sins. He does not shame her or humiliate her. He doesn't condemn her. Instead, he provides an opening, a moment to convert. He offers her the opportunity to receive life giving waters. In this encounter, we see the whole Christian life! She encounters Christ, hears and trusts in His Word, receives His love, and goes and shares this Good News with others! Jesus does not enslave her by chaining her to the memory of her sins. Instead, he frees her from those chains. St. John tells us that she left the water jug at the well and ran off into the town. She no longer needed the jug because she no longer needed to search for fulfillment elsewhere. She now had welling up within her life giving waters.

In the parable of the fig tree, Jesus makes clear that if the tree doesn't bear fruit, it will need to be cut down. All of us have been planted by the Lord, but we are planted in order to bear fruit. A time will come when we will be judged. Either we bear the fruits of holiness or we are barren. At a certain moment, we will have to give an account of our life. Sometimes we hear mercy spoken about in a way that sounds like, "God is merciful so I can keep on sinning." But this is not mercy. Mercy means that God is giving us time to repent. Lent is a time of mercy precisely because it is a time of repentance.  The Lord gives us the fertilizer of His Word. He gives us the Sacraments. He gives us the spiritual weapons of prayer, fasting, and almsgiving. He gives us TIME. He gives us THIS time.  It is a gift to us so that we can repent and be given new life, a life welling up within us. He gives us this time so that we can be free from our past sins.

A worthwhile exercise for all of us this week is to honestly examine our life. We can do that without fear in the presence of the Lord. We need not hide anything from Him. He loves us. Are we bearing the fruits of holiness or are we barren? Are we enslaved by some sins? Whatever our sins are, let us not be afraid to honestly and humbly share them with Christ. Unlike the Devil and the world, Jesus opens up a new way for us. He does not leave us dead and shackled, he gives life and freedom. He gives us the present moment filled with His Grace.

Jesus offered to the woman at the well and to the fig tree something that the Devil and the world do not offer. He offered them a second chance. He offers it to us as well.  What should we do with this second chance? That's easy.  Repent.
Posted by Fr. David Barnes at Sunday, March 24, 2019 1 comment:

The Transfiguration and Why You Cannot Leave the Catholic Church 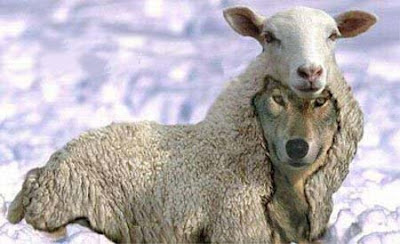 On Ash Wednesday, we began Lent by hearing Jesus warn us against doing things for the wrong reasons. When you give alms, don't blow a trumpet. When you fast, don't look gloomy. When you pray, go to your room and close the door. Do things so that God sees them. Don't do them for the purpose of showing off to others. The Lord, however, doesn't say, "Don't do those things." He says, do them for the right reasons.

In a homily on that passage, St. Augustine says that just because wolves sometimes dress in the garb of a sheep, doesn't mean that the sheep should give up their sheep's pelt! That line has continuously come back to me during these first days of Lent. Mostly, it comes to mind because I've heard more than one person say that they are struggling to remain faithful to the Church these days. I get it. It's been a tough year. I won't even try to get into the long list of reasons because different people have different reasons. What is tearing at the heart of one person might not necessarily be what's angering another person. But, lots of people are angry, hurt, and discouraged. I get it.

Today in the Gospel, Jesus takes his companions--Peter, James, and John--up a high mountain. The journey takes effort and is demanding. The spiritual life is demanding. It requires effort, commitment, patience, and long-suffering. At the height of the mountain, Jesus is transfigured before His companions. He reveals to them His Glory. Their effort and commitment, their patience and their long-suffering is rewarded. Why does the Lord reveal His Glory to them? He wants to strengthen them so that in a short time, when they see this very same body brutalized, tortured, and ultimately killed upon the Cross, they will not be scandalized beyond repair. He wants the memory of what He revealed to them on the mountain to be preserved within them and to sustain them through the dark days of the Lord's Passion.

We are the Lord's sheep. We are His flock. Our pelt--our clothing--is our baptismal robe. As members of His flock, we are called to live a life of prayer. We are called to reject sin. We are called to worship God in His Church, to receive the Sacraments devoutly, to live a life of charity. Are there wolves who dress the same way?  Are there wolves who do all of those things, disguising their sinister intent by appearing to be sheep?  Yes, there are. So there has always been. And, even the sheep are often weighed down by sin and weakness.

The Transfiguration is given to us so that in times of adversity, times of trial, and times of evil, when we feel incapable of taking another step along the road of discipleship, we might call to mind the Glory of Christ. His Glory is sometimes hidden from our eyes, but the Transfiguration reminds us that His Glory is indeed there. His Glory will prevail over sin and over death.

The wolf wins if he gets us to surrender our Catholic life. He wins when he cons us into abandoning the Catholic life. Now is the time to become more Catholic, not less. Now is the time for Christ's sheep to look upon the Good Shepherd--in all of His Glory--and to tell the wolf that he can take his lies and deceptions and go straight to Hell.
Posted by Fr. David Barnes at Sunday, March 17, 2019 3 comments: