Homily on the Feast of St. Patrick 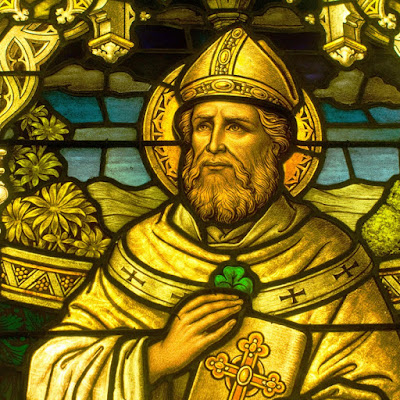 I've been off of social media for the past few months and also haven't been blogging much. (And it's been great!!) On St. Patrick's Day I had Mass at the seminary, so I figured I'd post the homily here. Hope you're all having a great Lent.

Years after escaping slavery in Ireland, Patrick had a dream in which he saw the people of Ireland, standing by the western sea, holding out their hands and appealing to him to come and walk among them. Patrick returned to the place of his enslavement and brought the Gospel with him. Many of us who sit in this chapel this morning, do so because St. Patrick responded to the urgent needs of his day sixteen centuries ago.

The evangelization of Ireland—and the evangelization of the whole world—began by another seaside. It would, I think, be almost impossible for a priest or a seminarian to hear St. Luke’s account of this seaside encounter in a detached or impersonal way (Luke 5:1-11). No, we experience it as the memory of an event that happened to us. The encounter between Peter, Andrew, James, John, and Christ is our encounter too. This event by the Sea of Galilee echoes through time. It echoed in the heart of Patrick and echoes in our hearts too. We hear His voice. We are fascinated by His Presence. We know that he has climbed into our boat, that he has chosen us. We too feel that profound unworthiness. We also are overwhelmed by our weakness when confronted by his power. We beg him to depart from us because of our sinfulness.

I’ve always been struck by the fact that St. Luke preserves for us the detail that they were “washing their nets” when Jesus approached. Having spent all night fishing and catching nothing, they were almost done. They were probably exhausted and disappointed. At the end of a long night, I imagine that this last task was both tedious and annoying. Once the nets were cleaned and stored, they were done.

And Jesus asks them to cast them again into the sea, to begin again. What makes the apostles obedient to this command? Is it not because they were fascinated by Christ, moved by His words and by his Presence?

St. Patrick converted Ireland not with an idea or a program, not with a gimmick, not with a public relations campaign. Patrick converted Ireland because he continuously lived the memory of Christ. He was faithful to that fascination with the Person of Jesus Christ that originally moved him. He was faithful to the echo in his heart of Jesus calling him. Christ was not an idea from the past, but an event of the present.

Priests, of course, should be open to various methods and programs designed to help parishes. But it is only when we are completely convinced that we can catch nothing on our own, that we are ready to welcome Christ into our boat. Parishes, dioceses, campus ministries, seminaries...need priests who are fascinated by the Presence of Christ. They need priests who are moved by Christ’s words, who hear the Gospel not merely with their ears, but with their memories; who experience the Gospel as an event that they are part of. Priests who experience the Gospel as something that they themselves have encountered. The new evangelization needs priests who preach the Gospel not merely as men who can quote it or write a term paper on it. Rather, the new evangelization requires priests who preach what and who they themselves have encountered in the gospels.

We need priests who, after working all night catching nothing and who are almost done washing the nets, are so fascinated by the Presence of Christ that they are willing to lower the nets yet again. Priests who are not constantly fascinated by Christ and who are not attentive to his words, will eventually wash their nets, stow them away, and give up. If we aren’t moved by Christ, how do we expect to move anyone else?

If we do not live the memory of Christ every day—fascinated by his presence and by his words—then we will never be moved to lower the nets after washing them. I think many priests who settle for a bland type of priesthood do so not because they haven’t tried different various methods and projects. I think it’s because they no longer are interested in Christ. They have forgotten what his voice sounds like. They have no memory of being by the Sea of Galilee with him. They no longer place their head upon his heart. They no longer are moved by his presence. They no longer fall to their knees at the feet of Jesus, overwhelmed by his goodness, love, and power.

No matter how successful the first apostles were or how successful the Apostle to Ireland was, they must have always felt poor before the enormity of their mission. We too are faced with a daunting task. The seas in which we will cast our nets will often be unwelcoming. The winds will be against us. The environment surrounding us may be hostile. This is not our worry. When Jesus told Peter to cast the nets again, he did not say how many fish he would catch. He didn’t promise Patrick that all of Ireland would be converted and then send missionaries in turn to the rest of the world. He just asked Patrick to be obedient.

We all want to be successful priests. We want to be successful fishers of men. Success, however, is not measured in artificial numbers. It’s measured in fidelity. Successful fishers of men are those who—having exhausted their own resources—become once again fascinated by Christ, moved by Christ’s Presence, and obedient to Christ’s Word. Men who rely upon God’s Word and God’s strength.

There have been countless times in my life (and I hope someday, in your life too)—be it in a confessional, at a deathbed, or in some other priestly encounter—that I have thought to myself, “If this one thing were the only thing I ever did as a priest, it would be enough.” Sometimes, at the Lord’s command, we lower the net and we catch just one fish. That is still a miracle.

St. Patrick had a dream that the people of Ireland were standing by the sea, holding out their hands, calling him. He had already escaped this place. He, in a sense, had worked all night and was washing his nets. What made him return to Ireland? What made him cast his clean nets back into the sea? Deep in Patrick’s soul was the conviction that he too stood by the sea. He was faithful to the lived memory of Christ climbing into his boat, speaking like no man had ever spoken before, and bringing him out into the deep.