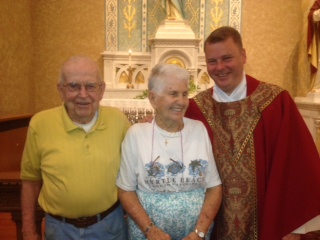 Every morning at St. Mary Star of the Sea Church, Henry and Phyllis can be found in the second pew.  Up until a few years ago, they were snowbirds and so would be gone for a few months of the year.  Because of health issues, they stopped going away for the winter.  While I'm sorry that they lost out on their winter warmth, I have to admit that I'm glad they're here full time.  Henry leads the communion hymn every morning.  For thirteen years, he's either picked, "O Lord I am not Worthy" or "I Love You Lord" as the hymn.  After thirteen years, the selections haven't grown old.

Of course, in Henry and Phyllis' calendar, thirteen years is just a drop in the bucket.  We honored and prayed for them today because they are celebrating their 67th wedding anniversary!  When people argue against the Church's teachings on marriage, I'd like to take them to meet Henry and Phyllis. They are witnesses to the truth about marriage.  If you want to see what marriage was meant to be, there it is.

Justin converted to the Faith, in part, because he was struck by the witness of the Christians who were suffering and dying for the Faith.  He was moved by their example.  Without intending it, Henry and Phyllis provide all of us with an example of fidelity, love, and sacrifice.  Marriage--like every Christian vocation--is a sort of martyrdom.  Each spouse sacrifices his or her own self for the sake of the other.  It is a total self-giving.  When others see the way in which Henry and Phyllis love each other and sacrifice for each other, we recognize the truth and beauty of it.  Their witness spurs us on to do the same.

Henry and Phyllis--thanks for being witnesses.