The Power of Witnessing--A 102 Year Old Friend and Olympian 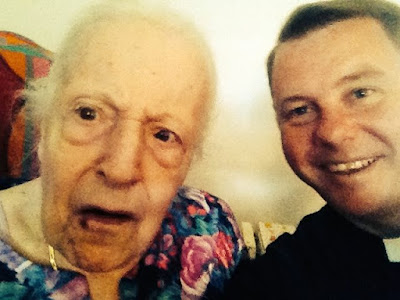 "Since we are surrounded by so great a cloud of witnesses, let us rid ourselves of every burden and sin that clings to us and persevere in running the race that lies before us while keeping our eyes fixed on Jesus, the leader and perfecter of faith."

Occasionally I am asked what "things" do I most like about being a priest.  There are many answers to that question, but one among them is being "surrounded by so great a cloud of witnesses." Firstly, commemorating each day the various saints of the Church's life, reading about their lives, and seeking their intercession is a beautiful gift. The saints in heaven are familiar friends to me because the Church, in her wisdom, continuously places me in their company. She places me in their company in the Liturgy, but also in my room. As I look around my study as I type this, the images of the saints and books--written by them and about them--surround me: Therese, Teresa of Avila, John Paul II, John Chrysostom, Augustine, Gregory the Great, John Henry Newman, the Blessed Virgin Mary, Aquinas, John Vianney,  and so many more.  What a gift! Their example of sacrifice, purity, fortitude, wisdom, faith, hope, and charity--their example of holiness--shows that holiness is indeed possible and that holiness is attractive.

That cloud of witnesses does not just consist of the saints in heaven. As a priest, I daily am surrounded by witnesses.  In fact, I just got off of the phone with one of them.  I met Sophie when she was a sprightly 86 year old.  She walked to daily Mass in those days, cooked Sunday dinner for ten to twenty people weekly, and was always good for cooking up a few hundred meatballs for parish events.  In her early 90's she thought it prudent not to attend Mass when it was icy and snowy outside.  These days, she's no longer able to attend Mass, but she is still such a great witness.  I called her today to wish her a happy 102nd birthday. During the past couple of weeks, we've all been amazed by the dedication, discipline, and athleticism of those participating in the Olympics.  For 102 years, Sophie has been competing for the reward of eternal life. Her body has been slowed by age. Her soul is in better shape than ever. She has trained long and hard and the goal is closer than ever.  Her example is such an awesome encouragement.

I think we underestimate the power of our faithful witness.  The parents who get their kids to Mass on Sunday despite a million other things that have to get done, the elderly person who struggles to get to Mass, the mother who is willing to endure the occasional glare from grumpy parishioners when her baby cries a bit during Mass, the father whose teenage son has the face of resentment on him for being dragged to Mass . . . and the list goes on.  Oftentimes people think about Mass in terms of what they get out of it.  But, we don't often think about how are being there gives something to others.  People need witnesses.  People need encouragement.  I need encouragement.  When we worship God on Sundays, we encourage the people around us.  We build them up and keep them strong.  When we miss Mass on Sundays, we are not only hurting ourselves, we are hurting others who depend upon us.

One of the things I love about being a priest is being surrounded by such a great cloud of witnesses.  Their example encourages me and spurs me on in my Catholic life. People like Sophie, my 102 year old friend, are like signposts pointing me to heaven, and they are an important reminder to me that I should strive towards holiness so that I can be a signpost for others.  Let's love God and worship Him and thus encourage one another to finish the race.
Posted by Fr. David Barnes at Sunday, August 14, 2016