From Grace to Glory: The Death of a Friend 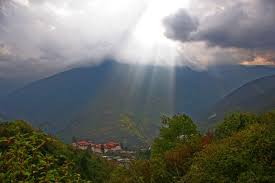 When I was a boy, my grand aunt lived in the apartment downstairs from my family and we would spend a lot of time in her home.  In her parlor, above the plaid couch was a framed print that depicted a small rural town.  The road in the print was not paved.  Instead, it looked more like a town from the old West.  For whatever reason, I would often stare at that painting and imagine what it must have been like to live there.  It seemed to have captured a moment in time when things were still unspoiled.  The painting represented to my young eyes, the world the way it was supposed to be; innocent, quiet, and friendly.

What I imagined that town to be, of course, hasn't existed since the Garden of Eden.  But, there's something in all of us that appreciates wherever it is in life that we discover a glimpse of life as it was originally intended to be.  Those glimpses provide to us a measure of certitude about how to live life and they provide to us a reference point of hope that there is indeed a plan for the world, despite the suffering and evil that exist.

Today, I attended the funeral for a beautiful woman named Ellen Quinn.  She was 95 years old and was a parishioner of mine when I was first ordained.  Her brother, Fr. Lawrence Burns, was a retired Maryknoll Missionary who lived with me for the first three years I was a priest.  He died thirteen years ago.  Ellen, and her sister Mary, and their brothers Matt and Fr. Larry would have lived in the imaginary town on the print in my grand aunt's parlor.  They are four of the most beautiful people I have ever encountered.

While Fr. Lawrence joined the Maryknollers and made his way to the jungles of Bolivia, his three siblings married and devoted themselves to their families.  And, they were devoted to one another.  It is hard to think of any of them without thinking of the other three.  And, it is impossible to think of the four of them without thinking of their parents.  I never met their parents, but I think often of how wonderful they must have been for having raised four such beautiful human beings.  Their father was killed while working in 1944 only two months before Ellen's wedding.

I'd visit Ellen whenever I could (but not as often as I would have liked) and occasionally we would chat on the phone.  I knew that when I called Ellen, I was also calling Mary and Matt because she would immediately call them to let them know that I called.  When I visited Ellen, she would beam with joy and you might think she could possibly explode if she became any happier.  It's a trait she shares with her siblings.  They never seem to talk about themselves.  They tell you about their children, grandchildren, their siblings, who is visiting, who is getting married, who is having a baby, who got a new job etc, but they never talk about themselves.  If you asked Ellen how she was feeling
she would say, "Oh, I'm doing fine. How are your Mom and Dad?"  In fact, she probably only met my parents once.  But, she and her siblings would ask for them as though they had been life long friends.

I'm certain that in her 95 years of life, there were trials, tribulations, family difficulties, sicknesses, and disappointments.  But, there was a goodness in her (and in her siblings) that seems capable of absorbing everything.  The possess a calm confidence in the providence of God.  When Fr. Lawrence was dying, I remember standing at his bedside with them praying the Rosary together.  I was struck by how they prayed together.  It was abundantly clear that they had lots of practice.

Today, at her funeral, there were five priests, children, grandchildren, great-grandchildren and many, many friends.  I don't often cry at funerals, but Ellen's passing touched me deeply.  As I looked at her two remaining siblings mourning her loss, I felt the Gate of Eden being closed more firmly.  In them, I have always felt as though I had caught a glimpse of that place where man had long ago been cast out.

The homilist for today's Mass was a longtime friend of Ellen's.  He said that he remembers being a four year old boy and going to Mass and just staring at her.  Some eight decades later, he gave her the Eucharist on her deathbed and committed her body to the earth.  In the homily, he mentioned that one of Ellen's closest friends--also in her nineties--had moved out of state recently and that she and Ellen had spoken on the phone shortly before Ellen died.  Ellen said to her, "I will hold the door for you."

Today, as we said goodbye to Ellen, I had the sense that a door was closing to Eden and that the memory of its goodness was disappearing even more.  It is a source of profound sorrow.  And, at the same time, I had the sense that the door to the new heavens and the new earth was opening and that this devoted disciple of Jesus Christ who had so beautifully lived the life of grace here on earth, was now experiencing the fullness of Glory in the life of Heaven.  St. Thomas Aquinas says, "Grace and glory differ not in kind, but only in degree."  Ellen lived a life of grace here on Earth.  When we saw her (and her siblings) we saw a foreshadowing of what heaven must be like.  Now, as she passes beyond our sight, she undoubtedly holds the door open for us and she will somehow make certain that we catch a glimpse of that heavenly homeland--of which St. Paul says, "Eye has not seen, nor ear heard, neither have entered into the heart of man, the things which God has prepared for them that love him."
Posted by Fr. David Barnes at Friday, December 28, 2012