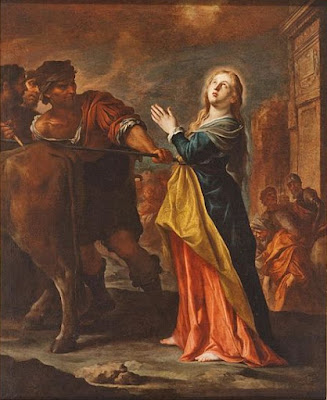 The ancient Roman Martyrology preserves for us the brutal and glorious accounts of the martyrdoms of the saints. Although various legends that grew up around certain saints are often mixed in with these accounts, the legends themselves offer to us profound spiritual nourishment. Today, in fact, would be such an example.

The Church today celebrates the Memorial of St. Lucy, a virgin and martyr of the Third Century in Sicily. Little is known of this young saint who dedicated her virginity to Christ and sought to give away all of her worldly possessions to the poor. Denounced as a Christian, Lucy--say some accounts--was ordered to be forced into prostitution. The legend goes that when the guards came to take Lucy away, they could not move her. She had become like an immovable column. Even after a team of oxen were put to the task, Lucy could not be moved. Unable to move her from the spot, they tortured and martyred Lucy where she stood.

The legends surrounding Lucy's exterior immovability offer to all of us a salutary insight into the interior life of sanctity. Lucy was immovable because she possessed the grace of constancy. Constancy is the virtue whereby one is made able to stand firm in some good act in the face of external obstacles. Lucy sought to give herself entirely and solely to the Lord. She was surrounded by the threats of political officials and soldiers, but she remained constant in her determination. In other words, even a team of oxen could not drag her away from her good resolution.

Constancy is connected to the virtue of perseverance. Perseverance is put at risk by two opposing vices. St. Thomas Aquinas says that "soft-living" makes a person less likely to persevere in a good act because doing so might require the person to surrender certain pleasures which they have become unduly attached. Soft-living disposes us to taking the easy way out and avoiding situations that may require effort on our part. For those of us who are in the the clergy, it is easy to see how this is, in fact, quite true. We can be dragged away not by teams of oxen, but by our fear of losing human respect, power, or pleasure.

On the other side of the equation is obstinacy.  Obstinacy "looks like" perseverance, but it is not perseverance. It is less a holding on to the truth as it is a holding on to one's own opinion. Obstinacy arises from vainglory and seeks to "win" at all costs. We see this, unfortunately, quite often in the life of the Church. Obstinacy can become a cheap imitation of perseverance. But St. Lucy offers us a tell-tale way of determining the genuine article from the cheap counterfeit.

St. Lucy, a young woman is surrounded by powerful men--political leaders and soldiers. They seemingly hold all of the power--and her fate--in their hands. You can imagine them all brandishing weapons, shouting commands, and binding her to the team of oxen. They are the ones moving in violent contortions and rhetoric. In the midst of that scene, is Lucy, serene, peaceful, and immovable. And in this, I believe, is the tell tale sign of the genuine article. Lucy did not insert herself into a controversy. It was not her own will that she was attached to, but Christ. There was an interior peace in Lucy that was in stark contrast to the violence and chaos surrounding her.

Those who surrounded Lucy were obstinate and given over to soft-living. They were used to being given whatever they wanted and they refused to be moved by anything other than self-will. Lucy--in her tranquil and peaceful constancy--puts the wicked to shame. Her purity and goodness shines ever more brightly in the midst of their darkness.

On her feast day, we might ask St. Lucy to intercede for us. We are often dragged from Christ and His Will for us--not by teams of oxen--but by the love of pleasure and of inordinate self-love. Through St. Lucy's intercession may we be freed from our attachments to soft-living and to our own wills so that we might always remain--no matter how difficult the circumstances that surround us--constantly and immovably attached to Christ and His Will for us.