Marriage Will Save the World 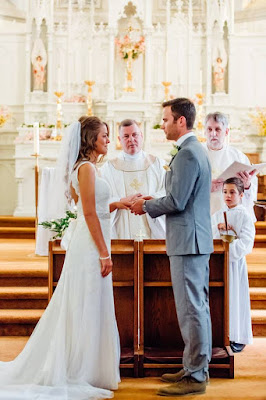 I have a love for words. Whether it is a clever joke, a poetic phrase, a beautiful song, a brilliant book, or a rousing speech, I enjoy words. Words contain incredible power. Recently, however, I've noticed that words are actually making me anxious. The words spoken about politics--mostly online--are vitriolic, demonizing, and divisive.  Most of what I read fills with me with either disdain for the author or for his opponents. And then there are the words spoken about the Church. I cringe when I see articles about the Church these days, even (actually, especially) when they are written or spoken by people in the Church. Words--which ought to unite persons--are now the weapon of division.

Yesterday, a young couple that I had prepared for marriage was wedded. As many couples do, they chose the second reading to be from St. Paul's First Letter to the Corinthians.  "If I speak in the tongues of angels and of men, but have not love, I am a noisy gone or a clanging cymbal." Words. There are so many words being spoken and written these days, but they are all noise. It's like the more that is spoken or written, the worse things become.

And then, there we were in that sanctuary. A man and a woman held each other's hands and spoke very few words to each other. "I take you to be my wife (husband).  I promise to be true to you in good times and in bad, in sickness and in health. I will love you all the days of my life." That was it. Simple words. Pure words. They were not clashing cymbals and noisy gongs. They were noble and dignified. That's because they were spoken in love. And in those words, God united them. It was beautiful. I need to hear and to witness words like that. God was healing the world through this newly established union. We were reminded that this is how God made it to be in the beginning. The union of Holy Matrimony gives us a glimmer of the original plan and it also is a manifestation of that original plan of union for which we have all been created.

After that wedding, I went to the home of some friends and offered Mass for them on the occasion of their 25th Wedding Anniversary. It so happened that the readings for the Mass this weekend were all about marriage. The first reading spoke about the creation of woman and the union between husband and wife. In the Gospel, Jesus spoke about the permanence of marriage; that it is an unbreakable bond. I told them that the homily for the Mass was really what was right before me: A man and a woman who spoke vows to one another 25 years ago and their beautiful children. The world needs to see families like that; men and women who give over their whole life to the raising of their children. More than ever, the world needs to see what true communion looks like. I need to see and to experience this type of communion. Everywhere we look, things are breaking apart. Words are tearing us apart. The people who are saving the world are those who can speak to one another in love and vow themselves to one another for life.

Today--Sunday--I have to preach to university students about marriage. It's challenging because the culture in which they live has a very deformed view of marriage. Like everything else, it has become politicized and weaponized. It is also often about "self-fulfillment" rather than about laying down ones life for the other person and for the children of that union. So many couples delay marriage or don't ever get married because they are not willing to lay down their life. Jesus' words in the Gospel today can appear to many to be mean-spirited or antiquated, and they reject his words out of hand. I think the key to understanding the Gospel is the last part. Jesus says that we must become like little children in order to enter into the Kingdom of God.

Yesterday, as I was leaving the wedding, I saw a man and a woman and their little daughter walking along. The daughter--maybe two or three--was walking carefully on the edge of the sidewalk curb as though she were on the edge of the Grand Canyon. Her face was filled with wonder and awe about everything she saw; buildings, leaves, trees etc. When we hear Jesus speak about marriage being between a man and a woman, that it is exclusive and permanent, or when we hear that marriage is intended to be for the pro-creation of children, it can sound like another political discussion. This is where we need the grace to be childlike. We need to stand in awe of the gift of marriage and have reverence for it. This union, established in the Garden of Eden, is how it was in the Beginning. God creates in order for us to experience communion, primarily with Him, but also with one another. Marriage is something beautiful, pure, and holy. Marriage is a gift from God. Marriage is about union.

I've been a priest for almost 22 years. One of the great joys of priesthood is living my vocation close to those who are married. Today, in the midst of so much division, I think that marriage is the key to healing a world broken and devastated by division. Communion is attractive and pure. We need witnesses of communion. We need men and women to live marriage.
Posted by Fr. David Barnes at Sunday, October 07, 2018