A Homily Delivered for a Soldier's Funeral

I'm still on hiatus from blogging, but today is Veteran's Day and I was thinking of a Funeral Mass that I offered a few years ago for a young soldier who was killed in action.  Thank you to him and to all who have served our country in the Armed Forces.  This is the homily that I delivered at his funeral. 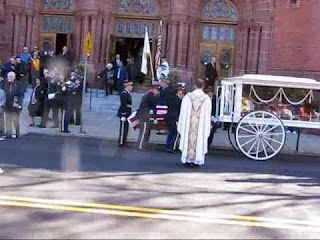 "We hold these truths to be self-evident, that all men are created equal, that they are endowed by their creator with certain inalienable rights, that among these are life, liberty and the pursuit of happiness."
At the very founding of this Nation, our forefathers recognized and acknowledged what was — in their words — self-evident. Namely, that every human life is sacred. And, that these inalienable rights — of life, liberty and the pursuit of happiness — are given not by an act of law or by man made decree, but rather are given as a gift from the Creator. The Founders declared that it is the role of government to secure and protect these inalienable and self-evident rights. Today — at home and abroad — the sacredness of human life is everywhere under attack. Today, what was self-evident to those who came before us is often obscured by ideology, by a culture of death and by evil.

Today we mourn the death of Stephen Fortunato. Stephen was a soldier. The soldier does not primarily exist to take human life, but to protect human life. What inspired Stephen to enlist in the Army was when he saw the inalienable rights of his fellow Americans threatened in the terrorist attacks of September 11th. In order to defend and to protect the life, liberty and happiness of others, Stephen voluntarily surrendered his own freedoms. He gave up the right to be with his own family and friends so that others could enjoy that right. He gave up the warmth of home and familiarity, so that others could enjoy such things. He gave up the right to come and go as he pleased so that others could enjoy that right. And last week, on a roadside in Afghanistan, he made the supreme sacrifice and surrendered his own right to life in order to secure and to protect the lives of his countrymen. Our Lord tells us that there is no greater love than to lay down one's own life for a friend.

On an October morning in 1983, it was actually October 2nd — the Feast of the Guardian Angels — a baby boy was carried by his family into this church and he was baptized. In that moment, Stephen Fortunato was given the promise of immortality; the promise of eternal life. From that moment on, he belonged to Christ. Christ, the Good Shepherd, was forever at the side of Stephen.

Today, we — who live half a world away — cannot help but wonder what the last moments of Stephen's life were like. Perhaps you wish that you could have been there with him as he breathed his last; with him to comfort and console him; with him to express your love and affection; with him to say goodbye. But this was not possible. In this way, Stephen's sacrifice is also your sacrifice. You have given a husband, a son, a brother, a grandson, a friend to a grateful nation. That nation and its citizens owe you and Stephen a debt of gratitude. Stephen was rightly outraged when others attempted to steal the God given rights of life, liberty and the pursuit of happiness from his countrymen. Stephen's response to that outrage was to sacrifice his own rights to protect and defend the rights of others. All of us who are gathered here today might well learn from his example. Imagine how much our nation would benefit if there were more persons who — like Stephen — were dedicated to protecting the inalienable rights of others — the right to life, to liberty and to the pursuit of happiness.

Although you are undoubtedly consoled by the military honors that Stephen deservedly receives today, our gathering here in this church reminds us that when the volleys have all been fired and the sound of the bugle has faded, there is something that lasts forever — something that remains.

When Stephen entered into the valley of the shadow of death on a roadside in a faraway land, he was not alone. You — his family — made sure of that. You gave him something that lasts forever. When you carried him into this church 25 years ago, you introduced Stephen to the Good Shepherd. And Christ has never left the side of Stephen. "Even though I should walk through the valley of the shadow of death, I will fear no evil, for thou art with me. With thy rod and thy staff, thou givest me comfort." Christ, the Good Shepherd, has led the way through the valley of death and in his resurrection, he has conquered man's greatest enemy — death itself. Jesus, the Good Shepherd, went ahead of Stephen to prepare a place for him in the Father's house. When Stephen closed his eyes to this world, Christ was beside him. And it is our Christian hope that when Stephen opened his eyes again, the Good Shepherd welcomed him to life eternal.

On an October morning 25 years ago, you carried your son into this church, and entrusted him to Christ the Good Shepherd. You trusted that Christ, the Good Shepherd would stay forever at his side and guide him beside restful waters and would refresh his soul. This morning, your family, your community, your parish, your country, carries your son again into this church. We ask God to have mercy on the soul of Stephen and to purify him. We give thanks to Almighty God for Stephen's life and for his devoted and complete service. We also ask God to give to each one of us a deep and abiding friendship with Jesus Christ — for he is the way to the Father's House. And apart from him we can do nothing.

Stephen began his journey to eternal life here in this church — dedicated to Mary, Star of the Sea. Today marks the end of Stephen's mission; of his journey. May Mary, Star of the Sea, now guide him from the troubled waters of Earth to the safe harbors of heaven. May Christ, the Good Shepherd, now open to Stephen the doors of the Father's House, and may Stephen discover within its halls what he so willingly and valiantly sacrificed for others — true life, true liberty and everlasting happiness. Amen.
Posted by Fr. David Barnes at Monday, November 11, 2013