At the Grave of a Little Boy

I really love being a priest and I am privileged to be a priest.


After the morning Masses today, Fr. Chateau and I went to another local cemetery and prayed for the deceased members of our parish who are buried there. There were many elderly people who attended the event and took us to the graves of their parents and grandparents.  Some of the stones had birth dates in the 1800's.  People were so happy to have us come and bless the graves and pray for their deceased relatives, friends, and neighbors. 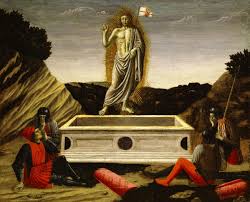 As we were just about finished, we noticed a young couple standing at a grave in the distance.  We walked over and looked at the stone.  Buried there was their six year old son.  Because there had been so many graves to bless, Fr. Chateau and I kept things moving fairly quickly as we prayed at each grave.  But here, the only thing we could do is pause.  Suddenly, life seemed so unfair and death seemed to mock us.  "This is our son, Father."  Immediately, my eyes filled up.

We prayed for their little boy and we prayed for them.  When our prayers were ended, I said, "You know that you will see him again."  His Dad said, "He's a good boy."  Then we paused for a few more moments.  As we left, they thanked us for coming.

In recent months, I have encountered a fair share of people who adamantly oppose belief in the existence of God.  For them, there is no ultimate meaning, no ultimate redemption.  Death is just a part of nature and that's it.

Today, I am grateful that my life is intended to be completely given over to witness to the person of Jesus Christ who conquered death and rose again.  My secularist friends would argue that I am only providing to those parents some fairytale hope in a hereafter.  I feel sorry for those friends.  Because what I am witnessing to is to a love that is eternal; a love that became flesh and made his dwelling among us.  A love that is the antidote for death.

For my secularist friends, they live in a world where the injustice of a little boy's death and the parent's grief has to be greeted ultimately with a shrug of the shoulders or perhaps a yearly memorial walk to raise money for some sort of good cause.  The injustice and pain, however, are just masked.  For these friends of mine--whom I love--the world, despite all of its natural grandeur and beauty, collapses in on itself.  Some would argue that the death of this little boy is an argument against the existence of God.  But, for me, this child's death is an argument against atheism.  A world in which pain and suffering have no ultimate answer does violence to our human heart.  Their answer is that there is not ultimate justice.  The Christian testifies that there is an answer to our hearts' deepest questions.

Today, as a priest, I walked into what seems the trophy case for an atheist.  Don't all of those graves stand in mockery to the notion of an all loving God?  Is not the heartbreaking scene of those two young people standing over their son's grave the ultimate accusation against the existence of God?  As a priest, I walked into the cemetery today and provided something that no atheist could ever provide.  I was a witness to hope.  The atheist could say, "Well maybe some day they will find a cure and nobody else will die this way."  But, the atheist cannot provide hope that takes away the sting of death and the permanence of the grave.  But we could.

In the face of that young couple today, I saw the whole thing plainly.  It actually helped me a great deal.  Without Christ, the whole world is a giant grey graveyard devoid of hope.  This is what atheism and secularism bring to the world.  Their mission is ultimately to lead people to abandon all hope.  The apex of their argumentation is: do not have hope.

My friends who embrace atheism and secularism often attribute blame to Catholics for every evil that has ever been perpetrated.  But, it is the they--the atheist and the secularist--who bring the greatest evil.  They teach human beings to despair and to abandon hope.  The Catholic Faith brings hope.

In an age when we speak so often about the "global community," we are at the same time experiencing a radical eclipse of the vision of the world.  We are closing in more and more upon ourselves.  The light of eternity is growing dim in our culture. To abandon the world into the hands of those who can only offer despair would be a great tragedy.

That little boy is going to rise from the dead.  His parents are going to see him again.  There is an eternal love that embraces the whole world.  I go to bed tonight sorrowful that a little boy died and that his parents mourn.  But, I go to bed joyful in hope.  I know that my redeemer lives and that on the last day, in our bodies we will look upon God our Savior.