Are You a Lost Sheep? The Shepherd is Looking for You 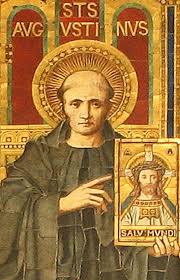 Five times a day, priests are required to pray the Liturgy of the Hours.  One of the those hours is referred to as the Office of Readings (or Vigils) and--in addition to several psalms and a lengthy reading from Scripture--there is often a reading from one of the early Church Fathers.  For the past couple of weeks, we have been reading through a beautiful sermon by St. Augustine concerning the life of pastors.  At great length he talks about all of the ways that pastors can harm the sheep of the flock.  He urges pastors not to live wicked lives, to seek worldly honor and praise, to give bad example to the flock, or to provide quick, easy, but false assurances to the sheep.  This sermon from Augustine is read by those of us who are pastors every year because we all need to be reminded of these things every year.

Augustine not only reminds us priests about what we should avoid, but he also reminds us what we are supposed to be about.  We are to be shepherds in Christ.  It is a privilege to be a pastor in the life of the Church because the priest makes present in the midst of his flock, Christ the Good Shepherd.  This is a beautiful task, but it is also a consequential task that requires continuous formation.  It is easy for pastors of souls to go off the rails.  That is why the Church gives us Augustine's sermon every year.  The pastor of today--although united to Christ the Good Shepherd by virtue of ordination--must continually draw closer to Christ and be conformed to the heart of Christ.  Whenever I read this sermon (and I suspect other priests are in the same boat), I squirm quite a bit.  Augustine says that even the strong sheep who sees the shepherd living wickedly might say, "If my pastor lives like that, why should I not live like him?"  Thus, Augustine concludes, the pastor becomes a murderer of the sheep.  Ouch!

This time around as I've read Augustine's sermon, I have found myself returning to Augustine's commentary on Ezekiel's prophesy wherein he says, "The straying sheep you have not recalled; the lost sheep you have not sought."  One of the benefits of pastors having stability of office is that they come to know their sheep.  They also come to know who has disappeared from the flock.  When you have a large congregation (I have two parishes), it might take a while, but you all of a sudden recall that "Joe" isn't around anymore or that couple who used to come once or twice a month has dropped out of sight.  You also sometimes have a good sense of why they are not coming.

Augustine basically doesn't care what the reason is.  He just says that shepherds are supposed to go and recall the straying and seek out the lost.  Some folks who are away from the Church really desire to be invited back.  I've also experienced some people who are bitterly angry because suggesting that they return to Mass--no matter how well and kindly you might phrase it--sounds to them as though you are accusing them of doing something wrong.  And, in some sense, we are.  If coming to Mass wasn't better than not going to Mass, then we wouldn't be asking them!  Now, many people know that they should go to Mass, but they just don't.  But, they are not offended by suggesting that they should.  In fact, there are some people whom I simply say "hello" to on the street and they launch into a sidewalk confession on how they're really going to get back soon!  But others, if I sent flowers to their home and said, "We really miss you," they'd be upset and consider such an outreach as an attack on their person.  Augustine--writing in the 300's!--knew already that some might react this way.  Let me quote Augustine at some length here:

"In one way or another, we go on living between the hands of robbers and the teeth of raging wolves, and in light of these present dangers we ask your prayers.  The sheep moreover are insolent.  The shepherd seeks out the straying sheep, but because they have wandered away and are lost they say that they are not ours.  'Why do you want us?  Why do you seek us?' they ask, as if their straying and being lost were not the very reason for our wanting them and seeking them out.  'If I am straying,' he says, 'if I am lost, why do want me?'  You are straying, that is why I wish to recall you.  You have been lost, I wish to find you.  'But, I wish to stray,' he says; 'I wish to be lost.'

"So you wish to stray and be lost?  How much better that I do not also wish this.  Certainly, I dare say, I am unwelcome.  But I listen to the Apostle who says: 'Preach the word; insist upon it, welcome and unwelcome.'  Welcome to whom?  Unwelcome to whom?  By all means, welcome to those who desire it and unwelcome to those who do not.  However unwelcome, I dare to say: 'You wish to stray, you wish to be lost; but I do not want this.'  For the One whom I fear does not wish this.  And should I wish it, consider his words of reproach: 'The straying sheep you have not recalled; the lost sheep you have not sought.'  Shall I fear you rather than him? 'Remember, we must all present ourselves before the judgment seat of Christ.'

I shall recall the straying; I shall seek the lost.  Whether they wish it or not, I shall do it.  And should the brambles of the forests tear at me when I seek them, I shall force myself through all straits; I shall pull down all hedges.  So far as the God whom I fear grants me the strength, I shall search everywhere.  I shall recall the straying; I shall seek after those on the verge of being lost.  If you do not want me to suffer, do not stray, do not become lost.  It is not enough that I lament your straying and loss.  No, I fear that in neglecting you, I shall also kill what is strong.  Consider the passage that follows: 'And what was strong you have destroyed.'  Should I neglect the straying and lost, the strong one will also take delight in straying and in being lost.'"

Part of the reason I began this blog is to provide some insight into what the priesthood is from the experience of a parish priest.  In so many ways, the priesthood is about the Heart of Christ.  Christ allows the priest to share mysteriously and beautifully in His Shepherd's Heart.  When one of the sheep is gone from the flock, the priest isn't mad or trying to browbeat the person back to Mass.  Jesus allows the priest to experience in his own heart the sorrow that Christ himself has that one of his members has gone astray.  The priest experiences in his own heart the existential drama that is taking place between Christ and the lost sheep.  In a sense, the priest mediates this drama by being the one whom Christ uses as his instrument.

When I think about the parishioners who have gone astray and are lost; when I think of the young people I've met over the years who were once ardent in the Faith but have gone astray; when I think of the friends on Facebook and other readers of this blog who have wandered away, I (and all of their shepherds) do so not with contempt, derision, or with some sense of superiority.  Christ the Good Shepherd looks upon these stray sheep with love and with concern.  The priest--the pastor, the shepherd--makes Christ's pastoral love for the sheep present here and now.  So, if you've managed to read through this very lengthy post and if you happen to be someone who has gone astray--no matter what the reason--let me say that Jesus, the Good Shepherd is calling you back to the flock.  Do not stray or be lost any longer. There is a mysterious drama that takes place between Christ, the Good Shepherd and the lost sheep.  The priest's voice, heart, hands--his total person--is placed at the service of Christ so that the lost sheep can be found.  So, I hope that this post clears away--virtually--some of the brambles and hedges and brings some lost sheep home.

"Hear the voice of the shepherd, lest you wander about in the mist.  Gather at the mountain of holy scripture.  There, are the things that will delight your hearts; there, you will find nothing poisonous, nothing hostile; there the pastures are most plentiful.  There you will be healthy sheep . . . that is the place where [you] will rest, where [you] will say: 'I am happy.'"