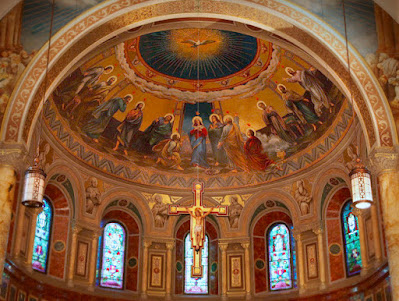 Today was supposed to be a spectacular day at St. John's Seminary. Because of COVID, the seminary community has been living in a bubble and has been fairly restricted in terms of interacting with the outside world. Today, however, was going to be different. A football tournament had been organized and had been the talk of the house for several weeks. Good natured bantering (ie, trash talk) had risen to epic levels. The seminarians organizing the day put in tons of work. Then, at the last minute, because of circumstances beyond our control, the day had to be called off.

This morning, when I woke up, instead of feeling regret for what was lost, I felt a deep gratitude for what has been given. Since the end of August, this community has mostly lived in tight quarters. Instead of being a time of irritability and annoyance, it has been a time of grace and of deep fraternity. The men who live in this house--both priests and seminarians--have been models of charity. This is what a Christian community is intended to be. The work that went into putting today together was a model of fraternal love.

During this semester, I have really been moved by and grateful for the strength of the charity that is evident in the life of those with whom I live. Sometimes we can water down charity. It can become merely an idea or a theory. Or, we can think that charity mostly consists in refraining from injuring our neighbor. During this past semester at St. John's Seminary, however, I've witnessed a charity that is bold and strong. It is like a blazing and powerful fire that continues to grow in strength and in intensity.

Every day, all of the priests and seminarians gather in the seminary chapel pictured above and receive the Eucharist together. Above us is an image of Pentecost, the Twelve Apostles gathered with the Blessed Virgin. Over each of their heads is the flame of the Holy Spirit. I like to think that what is pictured above in that chapel is also what is happening below among us. That moment of Holy Communion is not only a sign of union with God and with one another. It is also the cause of that deepening union. The Eucharist is the fuel that keeps the fire of charity blazing in this house. This blazing fire of charity consumes our vices and sins, purifies our hearts, and enlightens our minds. This ardent fire fuses us together in a bond of mutual love and affection, uniting us together to the whole Church and to God himself.

These days there is so much anger, cynicism, harshness, and division in the world, and there is a lot of coldness in people's hearts. I am grateful to sit back today, basking in the radiance and warmth of the fraternal charity of this house. "Ecce quam bonum et quam jucundum habitare fratres in unum" (Ps 133). ("Behold, how good and how pleasant it is when brothers live in unity.")