Does Your Heart Desire a Better World? 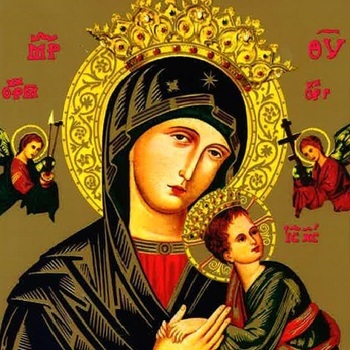 It's been quite some time since I last blogged. But, I love the Feast of the Assumption and wanted to share a few thoughts.

A few days ago, it was a hot summer morning and I was up early covering a 7am Mass at a parish about 30 minutes away from the seminary where I now live. As I was stopped at a red light, I noticed a construction worker hoofing it. It seemed evident that he was walking fast to get to work. A pickup truck stopped and rolled down the window. The construction worker asked a question and then he jumped in. My guess is that the driver was on his way to the same site, but that they didn't know each other.

I felt that way a few weeks ago as I witnessed the marriage vows of some friends of mine. Their wedding had been delayed because of the pandemic. In a church filled with people--masked and six feet apart--a bride walked down the aisle. I think for all of us in that church, we felt relieved to see something good, true, and beautiful; something normal. The way the world was meant to be.

Today, on the Feast of the Assumption of the Blessed Virgin Mary, we see something beautiful, comforting, and consoling. We see someone who--from beginning to end--lived life as it was intended to be. We rejoice because we see grace at work. We see grace lead to glory.

Over the past months, we have felt like we've been living in the apocalypse.  And the second reading today speaks of the dragon seeking--like the serpent in the Gook of Genesis--to destroy the woman. But he fails. The woman is victorious because of God's grace. The one who is pure, undefiled, beautiful, obedient, charitable, and strong is escorted today--body and soul--into Paradise. It brings us relief. Evil does not have the final word. Evil does not have ultimate power. She crushes the head of the serpent.

We live in a culture that is angry about everything. Angry about politics. Angry about people who wear masks. Angry about people who don't wear masks. Angry that the world isn't the way it was meant to be. On the Feat of the Assumption of the Blessed Virgin Mary, we are reminded that this anger and vitriol is not what will bring us happiness. The Assumption of the Blessed Virgin Mary reminds us that the true victory is the Victory of Christ, a victory that invites all of us into the life of grace.

If we can only raise our eyes as high as a political office, candidate or political party, we will never find peace in our life. In the Garden of Eden, the Devil convinced Adam and Eve to look no higher than a tree...and that was their downfall. He still tries to convince us that our true happiness will be provided by some political power, illicit pleasure, or some possession. Over and over again, we fall into his trap. It's not that we desire too much. We desire too little. We settle for less. We put all of our energies into things that cannot and will not ever make us happy: Power, pleasure, and possessions.

Today, the Church invites us to raise our eyes higher. We raise our eyes to a humble, lowly, self-sacrificing, faithful woman. A woman born in the outskirts of the Roman Empire. A woman who held no worldly power, a woman who lived a virginal life, a woman who possessed nothing other than the will of God. That woman today has been assumed into the highest heavens and granted the greatest glories known to humanity. And if we raise our eyes to her, we see life as it was meant to be. We experience a profound comfort and peace because we finally see something that is the way it was meant to be. Not only that, but we see that it is possible for us to live in a world like that. That fills our hearts today, gives us hope, and is our path to happiness...to victory.